The Aisha Bibi Mausoleum, situated in the village of the same name in the Zhambyl region, 18 kilometres from the town of Taraz, was built in the 11th or 12th century and is one of Kazakhstan’s most architecturally important monuments.

According to legend, the mausoleum was built by Karakhan, a ruler from the Karakhanid Dynasty for his beautiful fiancée Aisha-Bibi, daughter of Sufi poet Khakim-Ata, known as Zengy Baba, follower of Ahmed Yasawi.

Karakhan and Aisha fell in love with each other when she was just 16. Her father refused to give his permission for them to marry and Aisha left home.

“You will cross six rivers, but will not cross the seventh one,” her father called after her as she left. Aisha then crossed six rivers but stopped at the seventh river, remembering the words of her father.

At that moment, a snake crawled out from under a stone, bit Aisha and killed her. Karakhan arrived to see his lover lying dead on the ground. Heartbroken, he ordered his architects to build a mausoleum on the same spot so that her name would be remembered for ever.

On his orders, only the best construction materials were used and the best architects engaged.

Karakhan lived a long life. Before dying, as a firm sign of his endless love to Aisha, he ordered to be buried in a place from which her mausoleum could be seen.

To the right of the Aisha Bibi building is the Babaji Khatun Mausoleum, Aisha’s devoted lady in waiting. There is no tomb inside the building and the external walls are plainer than those of the Aisha Bibi Mausoleum, although an Arabic inscription runs across the top of the eastern facade, above the arched entrance. 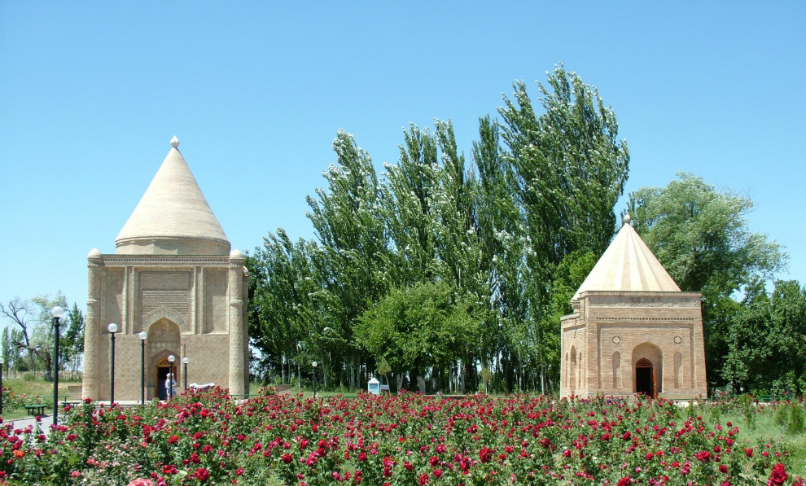 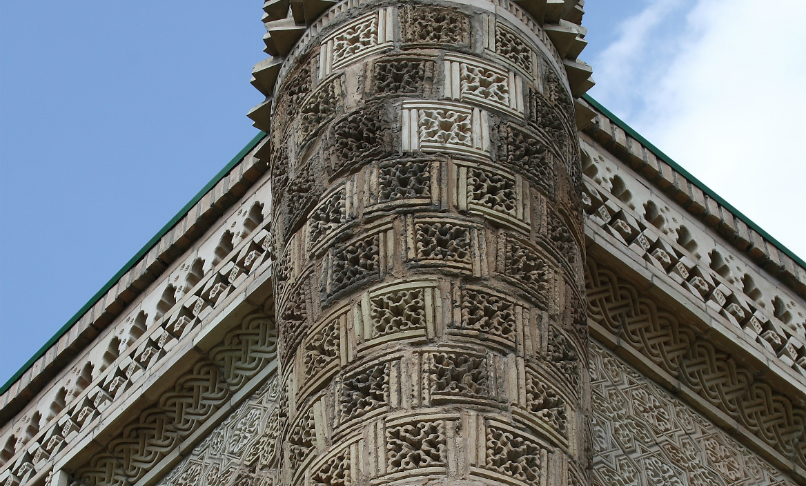 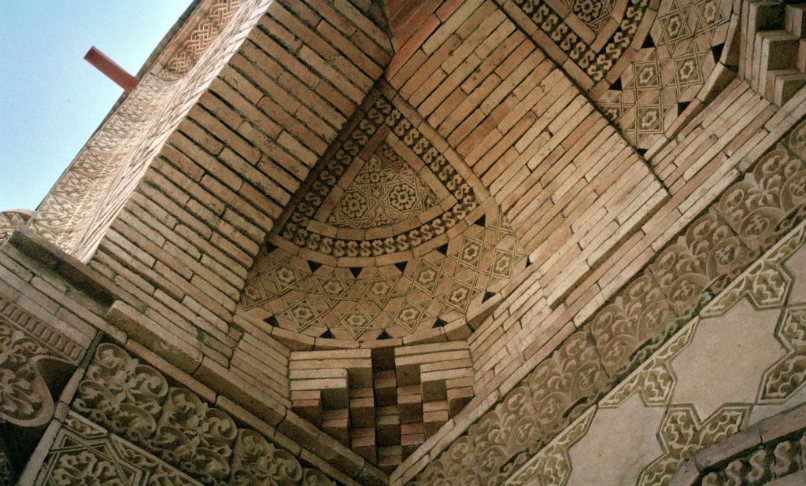 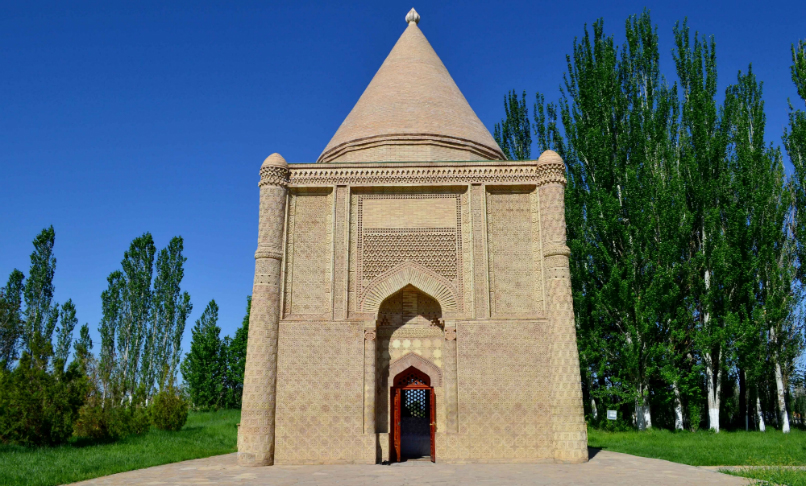 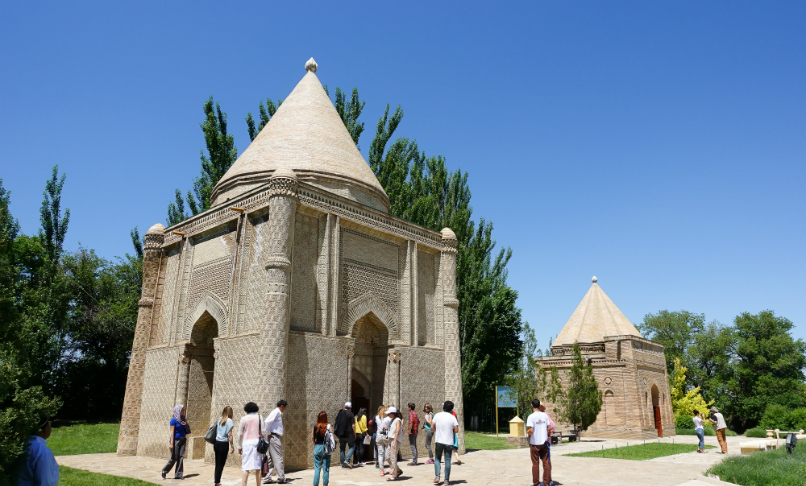 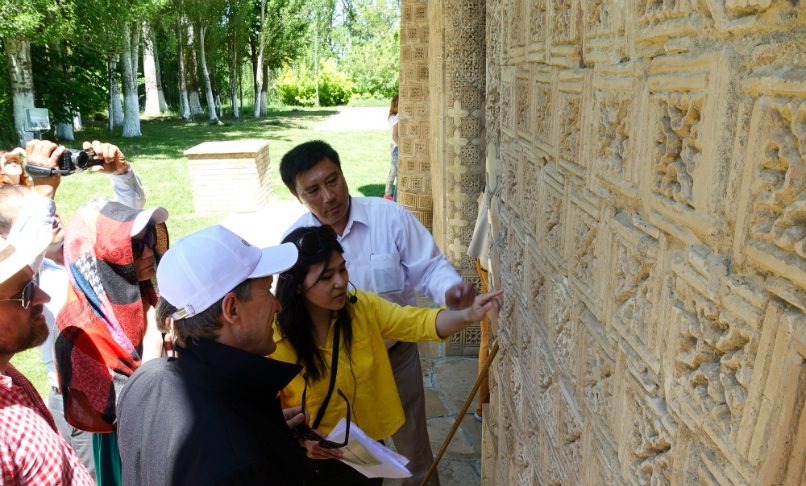 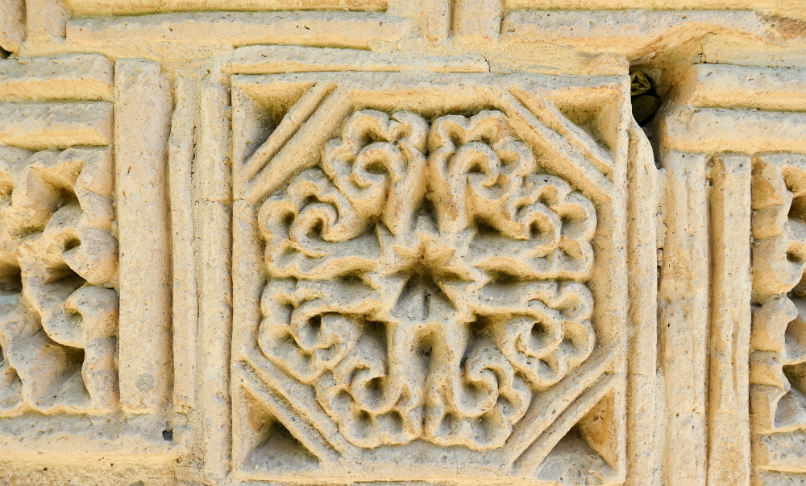 Because the Aisha Bibi monument is associated with the eternal qualities of love it is popular with couples and newlyweds, who come here to be photographed together. Thus, it is considered that those who visit the mausoleum of “eternal bride” on wedding day will live together for a long time and will be happy.

The mausoleum’s appearance matches its legacy: it is light and symmetrical, with a filigree decoration reminiscent of fine lace. Its walls are 80 cm thick and, on the outside, decorated with carved terracotta tiles with stylized calligraphy and 60 different floral geometric patterns.

A square construction, the entrance to the mausoleum is from the east, with a gravestone in the middle.

In 1960 a protective glass dome was built and to stop visitors from touching the mausoleum. In 2002 it was restored by architect Nishan Rameto and a park built around it.